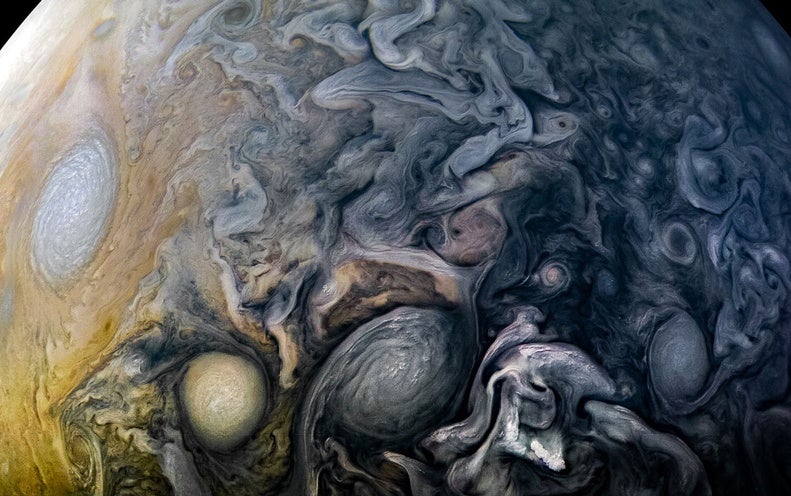 New research suggests why Jupiter, the largest planet in the solar system, waited about two million years for its early-formation growth spurt.

A team led by a Swiss researcher found that kilometer-size worlds smashed into the giant planet during that time, generating zones of high energy. This bombardment made it difficult for gas molecules to accrete, forcing the planet to grow more slowly.

The solar system is about 4.5 billion years old, and the a popular formation theory for planets says that they were formed out of an orbiting cloud of gas and dust that surrounded the young sun. Over time, the gas and dust clumped into small worlds, gradually accreting to each other to form the planets. [Our Solar System: A Photo Tour of the Planets]

Jupiter had a more complicated history, however. In a statement, research lead author Yann Alibert, an astrophysicist at the University of Bern in Switzerland, said it is interesting that smaller-sized bodies helped Jupiter accumulate mass, while larger-sized bodies crashing into the planet instead added energy to the planet—not mass.

Alibert said Jupiter rapidly grew in its first million years of formation by gathering up centimeter-size pebbles, growing to 20 times the mass of Earth.

However, the next 2 million years saw the planet pick up larger, kilometer-size small bodies, which are called planetesimals. Since these planetesimals were larger, they crashed into the planet with greater energy and released more heat, slowing Jupiter’s formation. So, by the time Jupiter was 3 million years old, it was 50 times the mass of Earth—experiencing a considerably slower growth rate.

After that phase, the planet quickly ballooned to today’s proportions, more than 300 times the mass of Earth, through runaway gas accretion, the new research found.

The University of Bern said this new data lined up with a separate set of results that another team of researchers gleaned from observations of meteorite compositions, published in the Proceedings of the National Academy of Sciences last year. The older research was led by Thomas Kruijer, a researcher at the University of Münster in Germany and Lawrence Livermore National Laboratory in California.

The older research also suggested a delay in Jupiter’s growth, but the University of Bern team modeled the information in more detail to find out why. That same growth delay might have happened at Uranus and Neptune, but more study will be required to confirm the hypothesis.

A paper based on the new research was published today (Aug. 27) in the journal Nature Astronomy.

Copyright 2018 SPACE.com, a Purch company. All rights reserved. This material may not be published, broadcast, rewritten or redistributed.