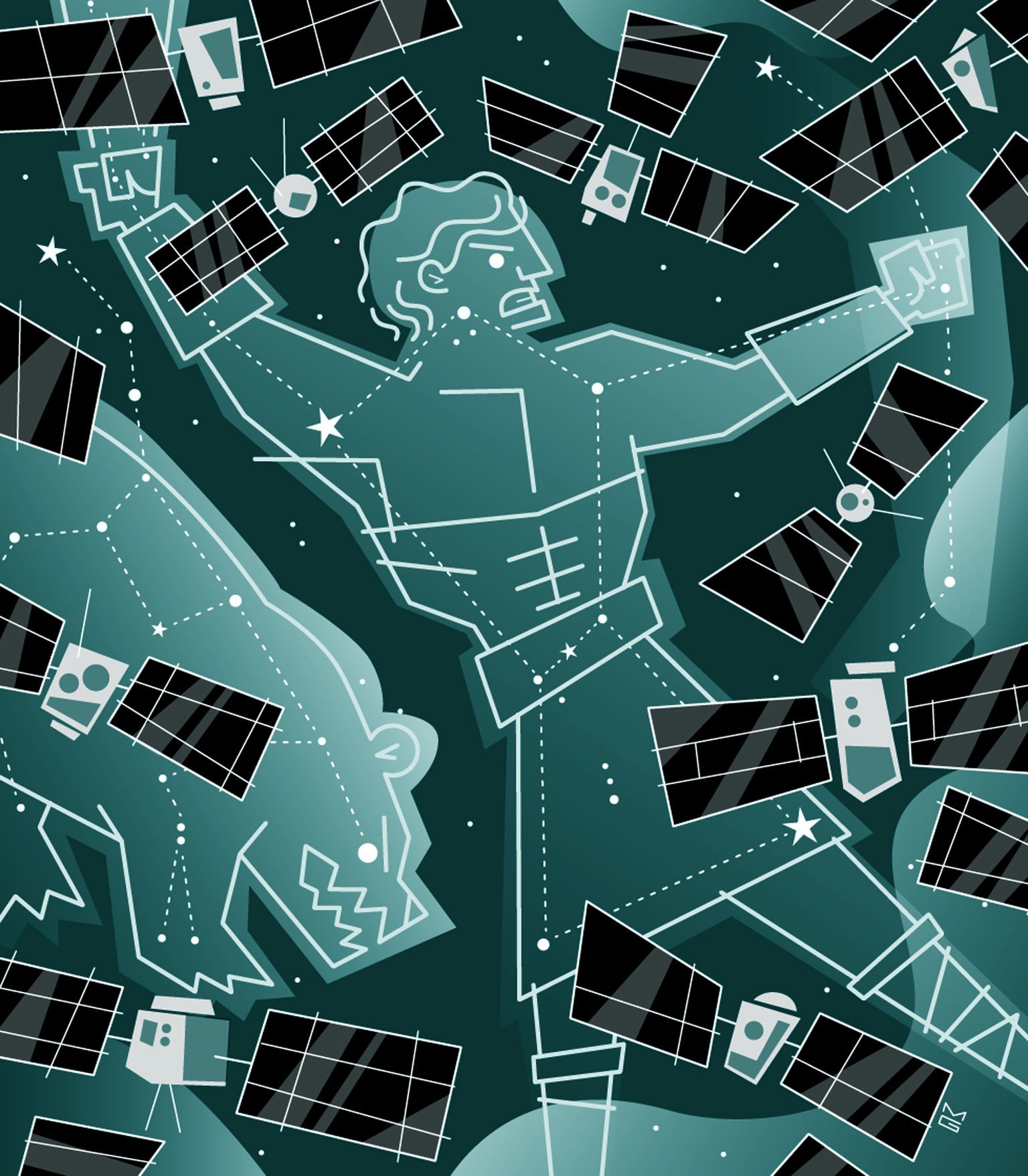 The company SpaceX has already launched hundreds of its Starlink satellites, with plans to put as many as 42,000 of them in Earth orbit. Its goal is to provide high-speed Internet to billions of people. Moving toward that kind of access is laudable and important, but it comes at a cost. Glittering with reflected sunlight, these first orbiters, sent up in the past year, are brighter than 99 percent of the 5,000 or so other satellites now circling Earth, and obviously there are going to be a lot more [see “Satellite Surge”]. This proliferation is bad for astronomy: the probability of a Starlink satellite crossing a telescope’s field of view and ruining an observation will be quite high near sunrise and sunset, when the objects are most brightly illuminated. For that reason, more than 1,800 of my fellow astronomers have signed a petition calling for governments to protect the night sky from this incursion.

This artificial mega constellation, and others being planned, will impact more than astronomy. The current crop of Starlink satellites is also easily visible to the naked eye in a moderately dark sky, and ultimately more than 100 moving points of light could be observable overhead near dawn and dusk from any point on the planet. They would then be about as numerous as the brightest stars that are easily seen above the horizon—the same stars used to trace the constellations.

Humanity is a mix of cultures that originated in diverse places, with diverse histories, but virtually all of them have stirring or cautionary stories inspired by that same star-studded celestial dome. Are we about to lose something that has intangibly bound us together, a common experience that has played its part in making us one human family, in exchange for a modern convenience?

In response to protests, SpaceX has promised to address the visibility problem by, for example, applying experimental coatings—essentially painting the satellites black—but the company’s aggressive launch schedule remains unchanged. And the satellites’ illuminated surfaces are mostly their solar panels—exactly the part that cannot be painted over.

Unfortunately, at present no regulations govern how bright a single satellite can be, let alone thousands of them together. It has been suggested that the Federal Communications Commission’s working assumption that satellites have no significant impact on the environment could be challenged in court, but even then, one nation’s laws do not hinder another country’s launches. Space literally has no borders, and the sky will need to be protected from orbital illumination at an international level.

UNESCO maintains a registry of World Heritage sites—places of unique and outstanding cultural or natural value to humanity—and is dedicated to their preservation. For some of these locations, such as the Namib Sand Sea and Gran Canaria’s Risco Caído, their view of the night sky is a defining characteristic making them worthy of World Heritage status. Unfortunately, under the World Heritage Convention, the UNESCO registry is limited to specific territories, and the sky is attached to no place in particular. So although UNESCO has declared the sky part of humanity’s universal heritage, it seems that the unique quality that makes that sky important to all of us excludes it from being protected. Given the planetary consequences, we hope that the United Nations will find a way to think outside of the box to save the sky for everyone.

Until now the dark sky needed no protection. Beyond human reach, it was our unobstructed window on the universe, an expanse unreachable and unchangeable. The transcendent beauty of a star-filled sky reminds us, as it did our ancestors, that we and our problems are small and that part of what makes us human may lie in our ability to recognize and admire the wonder and beauty of a universe larger than us—yet of which we are a part. The use of space as a common resource, by satellite operators in particular, should not destroy our only window on our world.

When I was growing up in Montana, it was a game to be the first to find a moving satellite among the host of stars in the night sky. Soon it could be a game to recognize the constellations behind a swarm of moving points of light. Astronomy will survive; I am much more afraid that we are all about to lose the very thing that inspired me to become an astronomer.