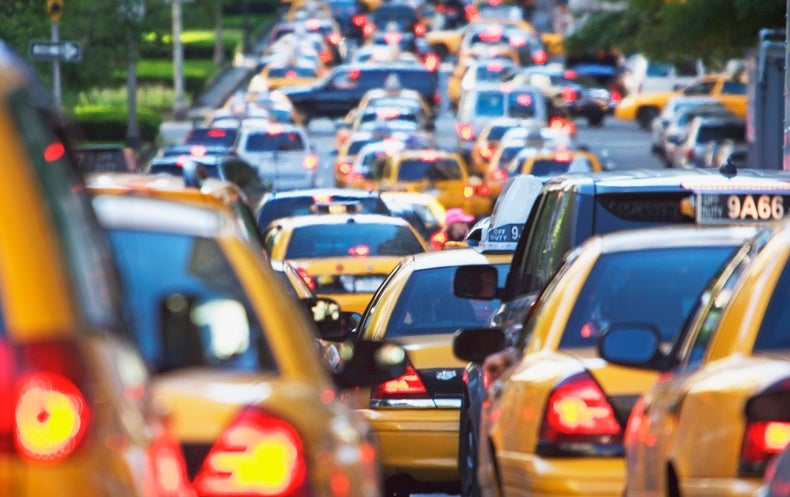 Driving through Manhattan during rush hour is any commuter’s nightmare. Cars and trucks move an average of 5 mph—barely faster than walking. And as the vehicles sit in traffic, planet-warming pollution spews from tailpipes.

That all may change soon.

But in the United States, the idea has struggled to gain traction.

A congestion pricing system for New York City was first proposed by then-Mayor Michael Bloomberg in 2007. But the proposal stalled in the state Assembly due to a variety of factors, including opposition from Democrats who worried about the cost.

The proposal “really didn’t have the political capacity to stand up against a number of members in each chambers’ anxieties about the cost,” recalled Rich Schrader, New York political director for the Natural Resources Defense Council, who has been advocating for congestion pricing in the state for more than a decade.

In 2017, Cuomo reintroduced the congestion pricing system after crowding and reliability issues caused a “state of emergency” in the New York City subway. But de Blasio came out in opposition to the plan, and it was ultimately scrapped from the state’s budget.

Cuomo and de Blasio have feuded about various issues over the years. But now, the frequent rivals are on the same page about the need to reduce congestion and air pollution in the busiest parts of the Big Apple.

“This crisis runs deeper than ever before,” Cuomo said in a statement last week, “and it’s now clear there is no way to address it without congestion pricing and other dedicated revenue streams.”

Environmentalists heralded the announcement as a sign that the Empire State is getting serious about tackling greenhouse gas emissions from its transportation sector, which pumped 75.4 million metric tons of carbon dioxide into the atmosphere in 2016, according to U.S. Energy Information Administration data.

“The transportation sector accounts for about a third of New York state’s greenhouse gas impact,” said Andy Darrell, New York regional director for the Environmental Defense Fund. “So without finding ways to reduce emissions from the transportation sector, there’s really no way to achieve the climate goals that the city and the state have set.”

Julie Tighe, president of the New York League of Conservation Voters, said the Cuomo administration has been tough on pollution from power plants. New York has long been a member of the Regional Greenhouse Gas Initiative, a cap-and-trade program covering the power sector in nine Northeastern states. And the governor has called for achieving carbon neutrality in the power sector by 2040.

But when it comes to tackling greenhouse gas emissions from transportation, Tighe said, the congestion pricing system would be a big step for the governor’s office.

“Transportation is clearly the next big thing we need to tackle to address climate change,” she said. “I really view congestion pricing as a big launching point for how we start transitioning the transportation sector.”

The congestion pricing proposal specifically calls for charging a daily fee of nearly $12 for cars and trucks driving into Manhattan below 60th Street.

A Cuomo spokesman said the fate of the proposal now rests with the state Assembly. Lawmakers are staring down an April 1 deadline to consider congestion pricing as part of the budget.

“Ultimately, the ball’s in the Legislature’s court to pass this key component of the budget and ensure that congestion pricing can become a reality,” the spokesman said.

The Long Island Senate Democratic delegation, though, has objected to the entire MTA proposal on the grounds that it directs funding to the subway system at the expense of the Long Island Rail Road.

“As the representatives for millions of Long Island commuters, it is our responsibility to ensure that any congestion pricing plan is not funded on their backs without substantial benefit,” the six-member delegation said in a joint statement last week.

“We are generally supportive of the concept of decreasing the reliance on automobile trips to New York City, while at the same time protecting the environment and easing congestion in Manhattan’s Central Business District. However, yesterday’s proposal raises troubling concerns.”

A spokeswoman for state Sen. Todd Kaminsky (D), who helped spearhead the statement, provided a copy to E&E News. She didn’t respond to a follow-up request for comment.

But Tighe, who has met with several lawmakers to advocate the congestion pricing system, said she thinks the Long Island delegation is willing to negotiate.

“I think those are all positions of posturing toward an agreement,” she said.

Reprinted from Climatewire with permission from E&E News. E&E provides daily coverage of essential energy and environmental news at www.eenews.net.

Systems Can Synchronize Only When Individual Parts Are Mismatched

Leave No House Behind in Flood Buyout Programs, Group Says