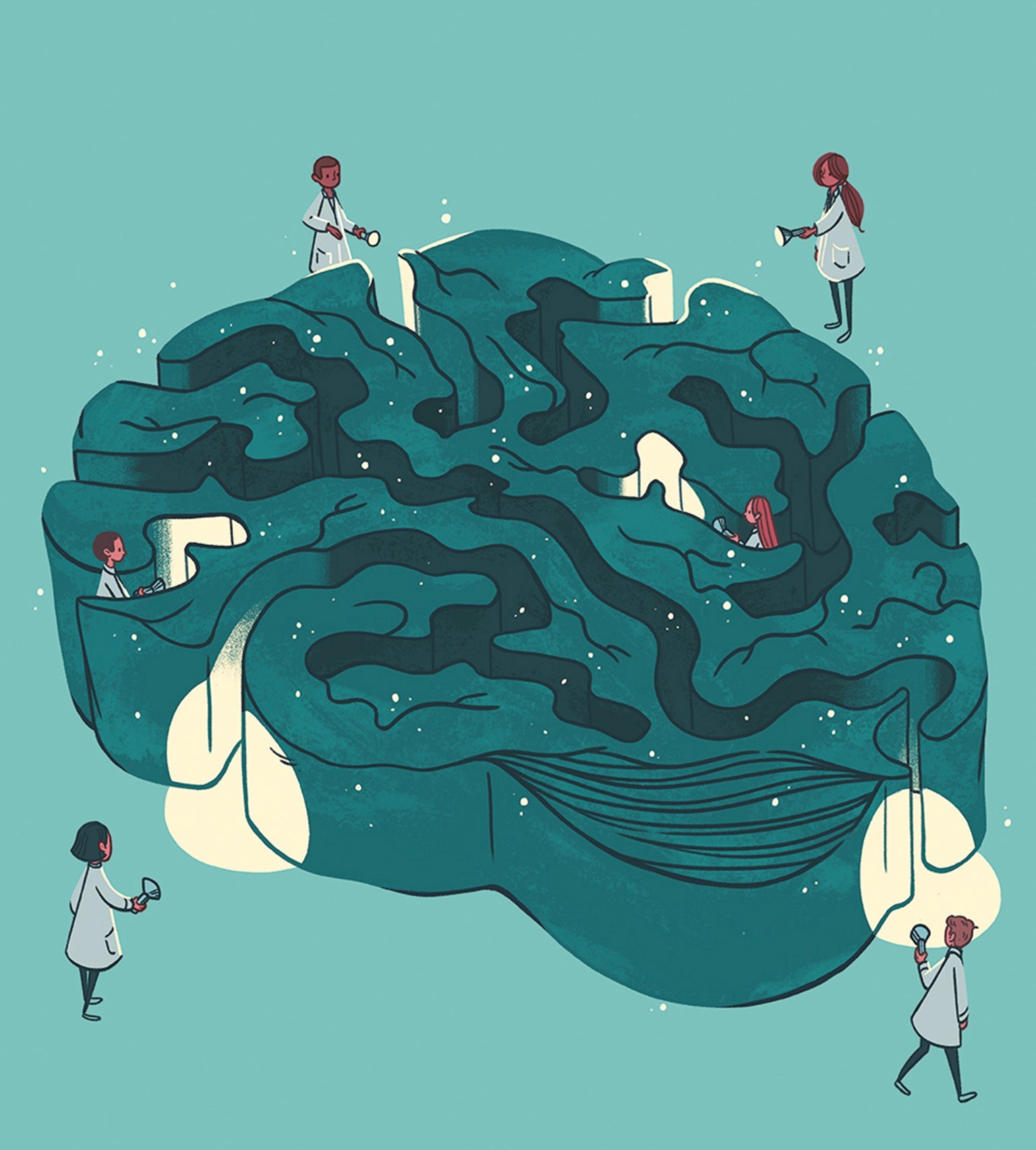 For more than 25 years one idea has dominated scientific thinking about Alzheimer’s disease: the amyloid cascade hypothesis. It holds that the disorder, which afflicts about one in 10 Americans age 65 or older, is caused by a buildup in the brain of abnormal amyloid-beta protein, which eventually destroys neurons and synapses, producing the tragic symptoms of dementia. There’s plenty of evidence for this. First, the presence of sticky clumps or “plaques” containing amyloid is a classic hallmark of the disease (along with tangles of a protein called tau). It was what Alois Alzheimer saw in the autopsied brain of patient zero in 1906. Second, families with inherited defects in amyloid precursor protein (APP) or in genes encoding proteins that process APP are plagued by early-onset Alzheimer’s. Third, mice genetically engineered to churn out excess amyloid tend to develop memory problems and do better when the amyloid pileup is stopped.

This evidence and more has led grant makers and drug companies to pour billions of dollars into amyloid-targeting therapies. More than a dozen have been tested, and one by one they have flopped. One of the biggest heartbreaks came last March, when a promising antibody to amyloid, called aducanumab, performed no better than placebo in patients with very early Alzheimer’s. Meanwhile researchers pursuing nonamyloid approaches were often left out in the cold, struggling to get grants and to have their work published. Science journalist Sharon Begley spent more than a year reporting on the lost opportunities in an article for the Web site Stat entitled “The Maddening Saga of How an Alzheimer’s ‘Cabal’ Thwarted Progress toward a Cure for Decades.” Begley notes that the amyloid crowd was “neither organized nor nefarious,” but its outsized influence stifled other avenues of investigation.

And there are so many avenues! Genetic and other evidence points to inflammation and immune dysregulation as big contributors to the disease—and likely targets for therapy. The same goes for vascular issues. Other suspected pathways include changes in how the brain handles lipids, glucose, protein folding, communication with gut microbes and a possible role for viruses. How and if this dizzying array of pathways might intersect is unknown. “I don’t think there’s an obvious linear way to put these pathogenesis stories together where A causes B and B causes C,” says Sam Gandy, director of the Center for Cognitive Health at the Icahn School of Medicine at Mount Sinai.

In choosing targets for intervention, “we can’t pick one system,” says Mary Sano, director of Alzheimer’s disease research at Mount Sinai. “We have to try as many shots on goal as possible.”

Gandy and his colleagues are pursuing several. In an intriguing 2018 paper, they showed that certain types of herpes simplex virus are overrepresented in Alzheimer’s-affected brains and might influence dementia-related human genes. “We are still grappling with how to understand it,” Gandy says. He is also testing a molecule called BCI-838 that promotes the growth of synapses in the hippocampus and improves brain function in rodent models of Alzheimer’s. Synapse preservation is probably the key end point in beating back dementia.

Currently 96 different agents are in clinical trials aimed at altering the course of Alzheimer’s, according to a 2019 analysis. Sixty percent target pathways other than amyloid. “Right now this diversity is the most important imperative,” says Richard Hodes, director of the National Institute on Aging (NIA)—the top public funder of Alzheimer’s research. In October the NIA announced a new $73-million effort to speed and diversify drug discovery.

Still, the NIA is not giving up on antiamyloid drugs. Hodes believes they may prove useful in staving off dementia in people at high risk for early-onset Alzheimer’s, such as those with inherited mutations or Down syndrome. Blocking amyloid may be less crucial or insufficient for those with the more common version of the disease. Such people typically have vascular lesions in the brain in addition to plaques and tangles, and they may have other age-related changes that have little to do with amyloid. Some may have look-alike forms of dementia, including two newly proposed types known as LATE and SNAP. Ultimately, thwarting what we broadly call Alzheimer’s is likely to require more careful diagnosis and, Sano says, “a more personalized approach.”

In the meantime, there are a few things we all can do that might help preserve our brains: Manage blood pressure. Try cognitive training. Get serious about regular exercise. And, Hodes would add, please volunteer for clinical trials.

The Internet Knows You Better Than Your Spouse Does