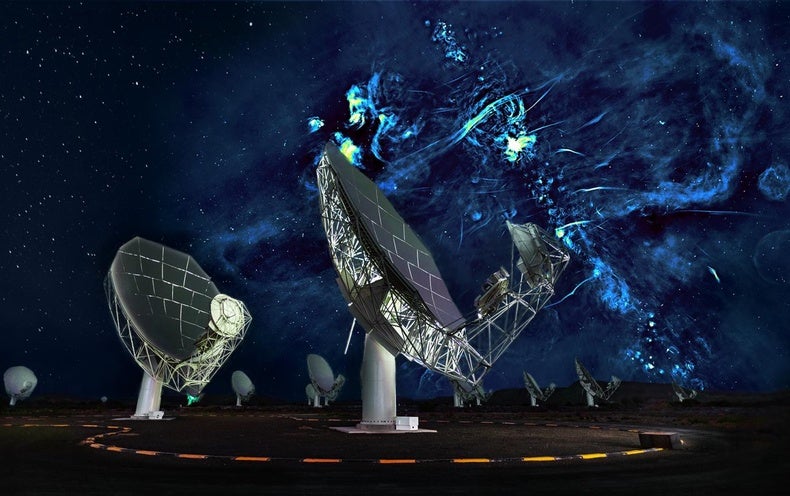 In its first major result, just over a year after its inauguration, a super-sensitive South African telescope has discovered two giant ‘radio bubbles’ above and below the central region of the Milky Way. The features stretch over a total of 430 parsecs (1,400 light years), about 5% of the distance between the Solar System and the Galaxy’s centre.

The bubbles are gas structures that can be observed because electrons stirring inside them produce radio waves as they are accelerated by magnetic fields. This activity suggests that the bubbles are the remnants of an energetic eruption of hot gas several millions years ago, say the authors of a paper describing the features, published in Nature on 11 September.

One possible explanation is that the super-massive black hole at the centre of the Galaxy underwent a period of intense matter-gobbling that created the outburst, say the researchers. Another could be a ‘starburst’ event—the near-simultaneous formation and subsequent fiery death of around 100 large stars. The shock waves of their explosions could have combined to blow a hole through the thick interstellar matter of the Galaxy’s central region.

Oliver Pfuhl, an astronomer at the European Southern Observatory in Garching, Germany, says that both starburst and black-hole activity might have been at play, even reinforcing each other. And researchers know of a starburst that took place in the region around 7 million years ago. “It is intriguing to relate the radio bubble to this star formation event,” he says.

Researchers working with South Africa’s MeerKAT radio telescope—a precursor to what will be the world’s largest radio telescope, the Square Kilometre Array (SKA)—discovered the bubbles when they created an image of the Galactic centre to celebrate the observatory’s inauguration and test drive their brand-new facility beginning in April 2018, says radioastronomer Fernando Camilo, the observatory’s chief scientist. Typically, it takes years for researchers to get a new observatory to work properly and to produce science with it. But with MeerKAT, they were stunned by how smoothly things went. “It kind of worked right out of the box,” Camilo says.

The bubbles could also solve an old puzzle in radioastronomy. It’s possible that the electrons accelerating inside them are the source of bright ‘filaments’ of matter tens of parsecs long that stretch out of the Galactic centre, first seen in 1984. Even larger bubbles, towering over those seen by MeerKAT’s, have been seen in the γ-ray part of the spectrum, and could have a similar origin.

The 4.4-billion-rand (US$330-million) MeerKAT is an array of 64 radio dishes, each 13.5 metres across, at a remote site in Northern Cape province. It will form the core of the South African part of the SKA, due to be built in the 2020s. The observatory’s second section will be in Australia.

This article is reproduced with permission and was first published on September 11, 2019.

How Astronauts Upgraded a Complex Experiment in Space [Video]