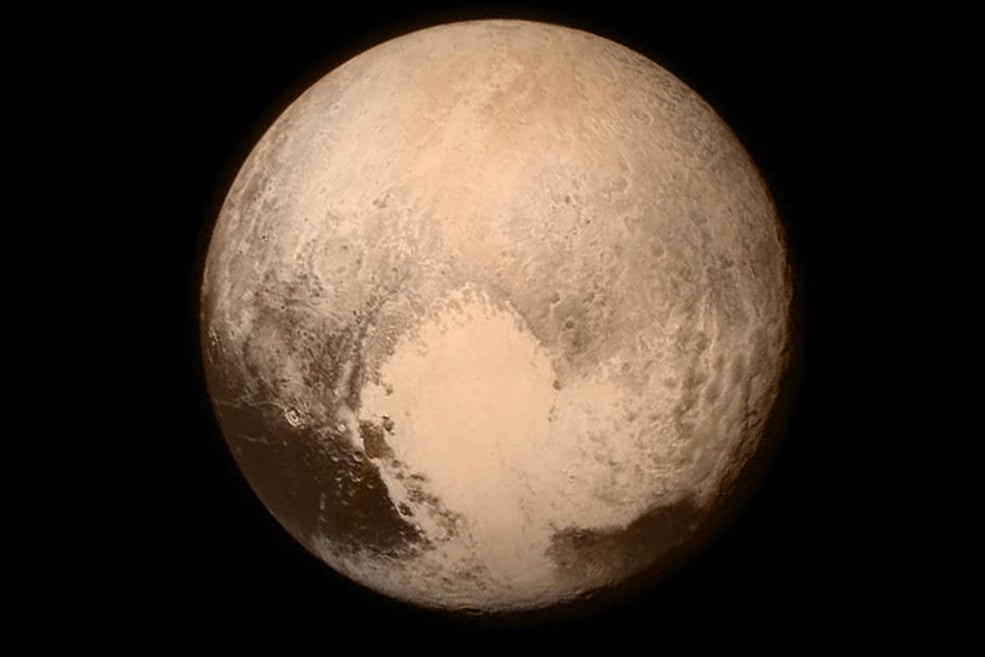 Pluto’s heart-shaped Tombaugh Regio—a colossal, highly reflective geologic feature that was captured with beautiful clarity by NASA’s New Horizons spacecraft during its 2015 flyby—is arguably the dwarf planet’s aesthetic highlight. Its elliptical western lobe, the 1,240-mile-long Sputnik Planitia, caught the attention of planetary scientists: It appears to be a bowl carved out by a monumental ancient impact. And today it is filled with young floes of churning nitrogen ice.

New Horizons did not get quite as good a look at the other side of Pluto. But when it had a peek, it did manage to spy a spot on the part of the globe exactly opposite to Sputnik Planitia that looked like a jumbled geologic jigsaw of crevasses, mounds and pits. With no clear formation mechanism, scientists speculated on its origin.

New research suspects that the impact that carved out Sputnik Planitia is to blame. According to simulations replicating that cataclysm, it sent powerful seismic waves around and through Pluto, reaching the area on the other side of the world and tearing up the land there to make the strange features seen by New Horizons. Crucially, the transmission of those potent seismic waves, and the subsequent creation of the specific dimensions of that chaotic terrain, would have only been possible if Pluto had a 93-mile-thick subsurface ocean of liquid water—an idea scientists have been considering for a while.

The work was virtually presented at this month’s 51st Lunar and Planetary Science Conference, whose in-person gathering in the Woodlands, Tex., was canceled because of the coronavirus pandemic. The modelling is still in its early days, and it is yet to be peer-reviewed. But using impacts and possibly related geologic features elsewhere to infer Pluto’s interior structure is “a really novel idea,” says James Tuttle Keane, a planetary scientist at NASA’s Jet Propulsion Laboratory, who was not involved with the study.

If this method of simulated planetary seismology holds water, Pluto’s secrets may not be the only ones to be extracted from afar, says Paul Byrne, a planetary geologist at North Carolina State University, who was also not involved in the research. The concept could be extended to all kinds of icy worlds and satellites, from the moons of the solar system’s ice giants to the frigid behemoths hiding out elsewhere in the Kuiper belt. Above all else, the research is a reminder of the incalculable value of New Horizons’s meet-and-greet with Pluto, says Jani Radebaugh, a planetary scientist at Brigham Young University, who was not involved with the work. “It’s amazing how we squeeze every little bit out it,” she adds.

Key evidence for Pluto’s subsurface ocean was elucidated in 2016. After New Horizons’s close encounter with the dwarf planet brought Sputnik Planitia into view, scientists realized this impact basin was in a strange place: sitting on the equator and in constant orbital alignment with Pluto’s largest moon, Charon, which does not move from its relative position on the other side of the world. Models suggest that when the basin formed, Pluto’s equator was elsewhere, but that after the impact occurred, an underground watery ocean began upwelling into the chasm while ice gathered atop it. To accommodate the sudden presence of this soggy, weighty, ice-filled crater, Pluto tipped over into its current alignment, creating the new equator.

But this concept is still only a hypothesis, and more evidence is needed to confirm the ocean’s existence. On Earth, the moon and Mars, scientists use robots to detect seismic waves travelling through the body—which reflect, deflect and contort, depending on what material they pass through—and then use these waves to paint a picture of its subterranean layers. But this approach is not possible on far-flung Pluto, =which lacks robotic explorers and any plans for future missions.

Help, as it happens, was hiding billions of miles away on Mercury. Its Caloris Basin, a 950-mile-long impact crater, lies on the exact opposite side of the world, or antipode, to a geologic pandemonium of shattered rock and maddeningly undulating topography. “There’s nothing like it anywhere else on the body,” Radebaugh says. Scientists have long thought this rough terrain resulted from Caloris’s violent creation—just as the undulating land on Sputnik Planitia’s antipode may have also been a result of Pluto’s own giant impact event.

So, scientists wondered, why not re-create Pluto’s seismology to find out? They turned to iSALE, which simulates planetary-scale impacts and replicates the physics of impact shocks. Adeene Denton, a doctoral student in planetary geology at Purdue University and lead author of the new work, says she’s “blown up Pluto countless times.”

The simulation that best replicates the dimensions of Sputnik Planitia and its mangled antipodal terrain involves a 250-mile projectile moving at 4,500 miles per hour and crashing into Pluto. In the model, as Sputnik Planitia is carved out, a massive shock wave travels through the world. A stress wave, which causes the dwarf planet’s physical deformation, trails the shock wave. Its movement depends on the sound of speed in the material in which it travels. The stress wave quickly traverses Pluto’s rocky core and moves slowly through the body’s icy shell. It travels even more slowly through the 93-mile-thick liquid-water ocean sandwiched between the two.

The ocean acts as a barrier to the transmission of the stress wave from the rocky core to Sputnik Planitia’s antipode. But this effect is offset by another aspect of this planetary layer cake: the ocean barrier also means the seismic energy moving through the ice shell is trapped there, enhancing the arrival of such energy at the antipode.

The core’s geologic composition also boosts the seismic-wave transmission. In the simulation that best fits the data, the core is made of serpentine, a rock that transmits stress waves more slowly than other likely candidates. The difference in sound speed between the core and the ocean is low, a quirk of physics that allows more seismic energy to move through the ocean toward the antipode than it otherwise could.

The overall effect is that a gargantuan amount of that energy is trained on Sputnik Planitia’s antipode. Although the software cannot resolve the creation of specific geologic features, calculations of the likely deformation there suggest this kind of seismic focusing produced its chaotic terrain.

That hypothesis is solid, but it is not yet a slam dunk. The resolution of New Horizons’s images of that half of Pluto is poor, compared with those of the Sputnik Planitia side, Byrne says, so it is not easy to work out what they are showing. “There’s a lot of weird stuff on that far side of Pluto,” Keane says. “And there are a lot of different ways that you can imagine creating some of those odd patterns that we see.” Another possibility involves volatile ices that dust Pluto’s surface, such as those of methane, carbon dioxide and nitrogen. These volatiles often fluctuate between gases and solids, chewing up the landscape as they do so. And they could be responsible for unusual terrain, including the mess on Sputnik Planitia’s antipode. (A recent, unrelated study also blames volatiles for creating the chaotic terrain antipodal to Mercury’s Caloris Basin.)

But if the new model is correct, it adds credence to the idea that Pluto and its icy cousins elsewhere could have substantial subsurface oceans. “We might need to think a little differently about the Kuiper belt itself and all of these distant worlds in it and maybe look at them a little bit closer,” Denton says. Far from being merely frozen-through snowballs, “they could all host such incredible, rich geologic histories.”